What Comes Out of a Glaze Kiln? 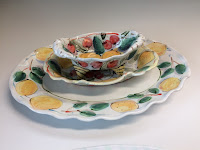 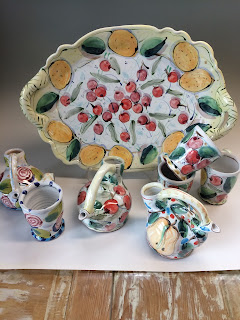 I am firing large platters for an order taken last fall, along with some smaller pieces.  The kiln was fairly closely packed, but not overly so.  In and around the larger pieces were the little scotch tumblers, in the second photo, and the strips and edge tiles which will finish off the top edge of the backsplash I've been tiling in the kitchen  (with the subway tiles I made).  In addition, in the last photo, there is a bowl that will be re-fired.  There was a small area on the upper edge where the glaze had been rubbed off.  I touched it up with fresh glaze while it was still warm from the kiln. Now, everything, except the tiles, gets sanded on the bottom (where the red clay shows), and then priced.  My first fair is coming up!---
Posted by Ann Tubbs Maiolica Pottery at 9:23 AM