pea vines from the fall garden--- 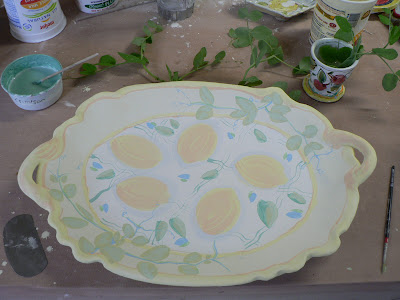 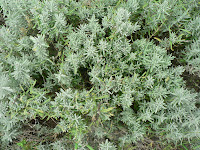 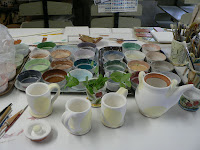 I'm finishing up the decoration for the last of the glazed bisque ware (or, trying to), so that the shelves will be clear before I begin to make more work. Orders from this last batch are done, so I have some time to try new patterns, and the garden has had a 'rebirth' since August, when we finally pulled the last of the weeds and replanted! Peas are growing, as are the cold weather salad greens, and the lavender looks grey and bushy. I am working, here, on a large platter, with the pea vines, and will do a similar pattern on the teapot and mugs.

Posted by Ann Tubbs Maiolica Pottery at 4:49 AM No comments: 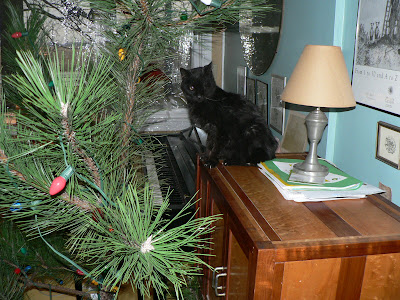 I have sad news: last Thursday, our old kitty, Zippy (the Zip, Zipster, Missizippi, and other endearments), died. She was 17 1/2, and I got her from Bill Shively who worked at the 577 where I was teaching. He brought four little kittens to work one day, in the back of his station wagon, with litter and food, and, for a dollar, I picked out the lively little black one. She was to be a gift to our son, Pete, who loves kitties. He was graduating from the 8th grade. I wryly thought this would be a good gift for him even though some of the other kids were getting computers;  our budget was a little more limited. After almost 18 years, I think Zippy outlasted, and gave more love, than those old computers! Zippy lived in the house, at different times, and in the studio, and was the boss of all the other kitties and dogs who came, and went. She was fiercely attached to us, and put up with our inconsistency and silliness. We miss her.
Posted by Ann Tubbs Maiolica Pottery at 6:45 AM No comments: 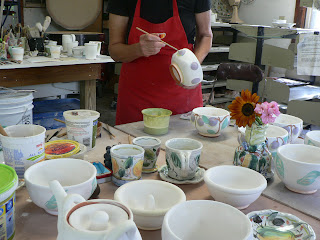 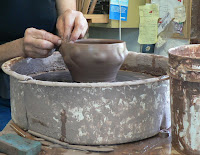 Now that fall is here, I am working on orders (at last! some say..) Here are some photos of a set of bowls: first, being thrown, then, being decorated after the bisque. They will match a mug sold earlier this summer, and one will eventually be chosen for the set of mug and bowl.
Posted by Ann Tubbs Maiolica Pottery at 12:04 PM No comments: