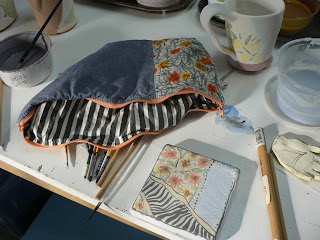 I had finished a number of the four-legged pots, and now needed to decorate them.   Because of their form, with the little legs, and twisted handles, and the inside/outside aspect, there are all sorts of ways I can approach the problem.  This winter, for Christmas, from Alisa Mazur, I received a set of hand-made cloth zippered bags which had a very intriguing set of patterns, so I decided to take them out to the studio and try some of the combinations of stripes, flowers, and colors.  Here are a few of the beginning applications: 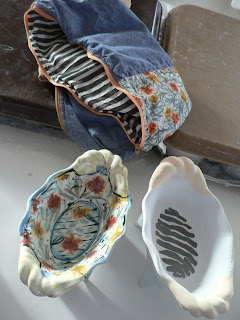 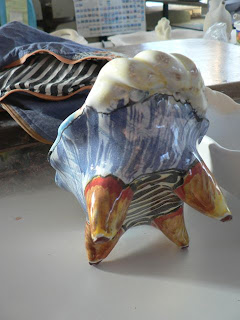 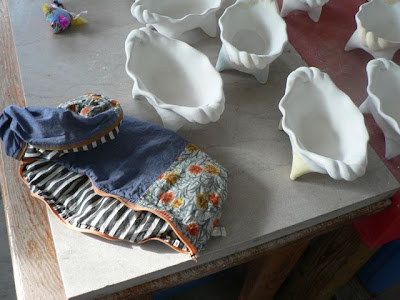 Posted by Ann Tubbs Maiolica Pottery at 2:15 PM No comments:


It's the middle of January; time to take stock!  Several local galleries have collections of my work which will be on display during their openings this winter.  Hudson Gallery, 5645 N. Main Street, in Downtown Sylvania, Ohio,  (www.hudsongallery.net) will be having an opening this coming Friday, January 25th, from 6 - 8 pm, for the 'Group of Nine'.  Next week, I'll post photos from another local gallery.  In the meantime, I am finishing the decorating on a number of pots that were either made before the studio sale in December, or in the break after the holidays.  Some of this work has been for orders!  (I'm late in finishing them..)  When they are done, and the glaze firings are caught up, I'll start on raw clay work, again.  There have been several galleries which have asked that I participate in shows beginning in May, or that I re-supply them in May before their summer sales season begins-----so I have lots to do before then.  This is also when I make work for the summer fairs.  And, if there's time, I'll also get some experimenting in--new shapes and surface designs.  More to come!

Posted by Ann Tubbs Maiolica Pottery at 5:42 AM No comments: