My Studio has had an upgrade this fall.  I took down all the white shelving, and re-painted the peachy color which had been there for 15+ years.  It's now a charcoal, or, as my friend,Denise, said,  Graphite.......  Then I bought Ikea shelving, and with a bit of what my husband and construction guru calls 'discussion', we hung three of the shelves, managing to get them reasonably level, and hooked up to the studs.  He had bought me a stud-finder, but I couldn't figure out how to use it, and found the old 'pound a skinny nail into the wall to see how easily it goes in' technique to be more useful.  And since we were the ones who built the studio, many years ago, who knows how on center those studs are, anyway.   I then found a recipe for making your own chalk paint on Pinterest:  2 cups paint to 1 cup Calcium Carbonate --- CaCO3   otherwise known as Whiting.  Most all potters have lots of that.  And it's an ingredient in my maiolica glaze. After I let the mixture sit for a while, I then sieved it with an old paper sieve from the drug store.  No good pottery sieves were ruined.  I drew a rectangle on the wall, and painted at least 3 coats on. Then I lightly sanded it, and 'seasoned' it, by rubbing chalk over the surface, and then wiping it away with a barely damp sponge.  Voilà!

Posted by Ann Tubbs Maiolica Pottery at 8:01 AM No comments: 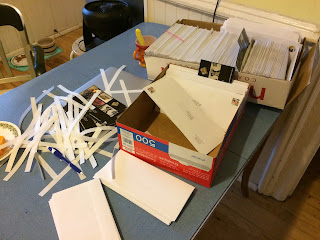 i've almost finished with the mailing  (stuffing envelopes, putting on stamps, sometimes writing a little something.  So many names, so many memories!  I am hoping to transfer customers to the electronic emailing service! 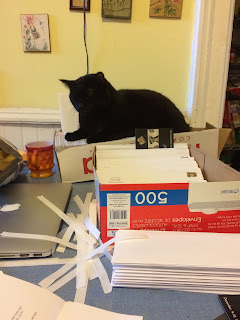 Posted by Ann Tubbs Maiolica Pottery at 6:10 PM No comments:

glaze firings for the next studio sale:

December is almost here; time for my studio sale.  Here are some before and after the glaze firing photos of large bowl/chargers. 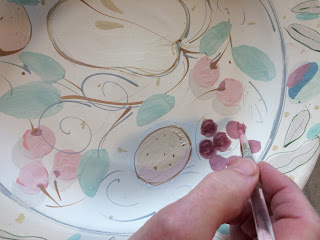 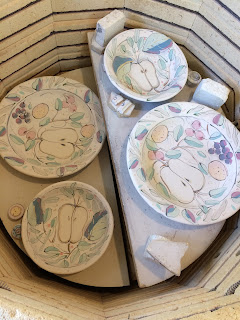 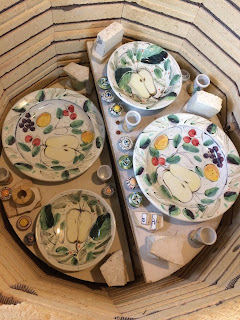 Posted by Ann Tubbs Maiolica Pottery at 6:05 PM No comments: