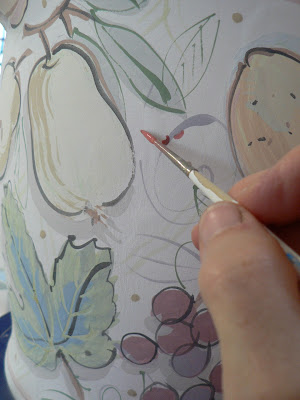 As I decorate a pot (the large flower pot, from the last post), I follow a series of decisions.  The first has to do with what 'theme' I'll use on the pot:  lemons, olives, hand with red pears, part of another decorated plate, etc.  Then I usually work with the largest forms for that particular theme, and lay down the lightest, largest color shapes, setting the pattern (or, working out what I might want the pattern to be) for the shape that I'm decorating. For example, I'll do lemons, and leaves, first, then smaller forms (grapes or olives, branches, and stems, and thin grey leaves).  The background is the last to be considered, and is sometimes, but rarely (these days) left entirely white.  I want the viewer's eyes to travel around the space, and I want there to be a sensation of depth, so I decorate the 'white' areas with smaller lines and swirls.  Low fired maiolica has a tendency to be flat in appearance; the glaze and clay, fired to cone 03 or 04, do not fuze to the extent that a cone 2 maiolica firing does (and I fire to cone 2).  So, in addition to the higher firing, I then add smaller lines, dots, and swirls with a very fine brush, or very small brush, or with a brush that has been opened up so that the bristles paint two closely parallel lines.  I also shade, with a pale taupe, each of the larger forms before I add the final black lines that go around the shapes.
Posted by Ann Tubbs Maiolica Pottery at 8:04 AM