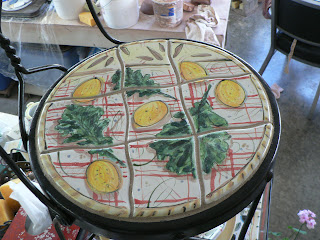 Here's the final look of the round piece of durock used in the chair seat---tile was set onto the durock using thinset, and then, when the tiles had dried, they were grouted.  It's one of those 'ice cream parlor' chairs.  P.s:  there are two entries for the "my father's T-square because I don't yet know how to move a previously started draft (started in October) to the current head of the list, so I simply copied and pasted it--thus, it appears twice....(and everything I do the the first's title automatically appears in the second one---conjoined twins......Oh, well....back to the studio where I am decorating many pots, in my usual frantic effort to have enough work for the studio sale in December.  Is everybody as behind as I am?  HAPPY THANKSGIVING, EVERYONE!
Posted by Ann Tubbs Maiolica Pottery at 11:11 AM