What Really Happened This Summer: 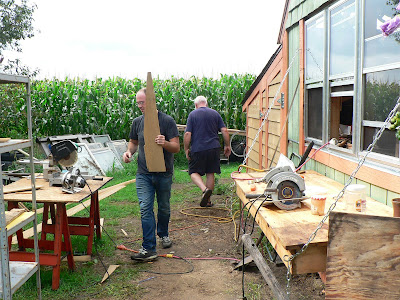 I know it looks like I haven't been working in the studio very much this summer. But the truth is, I have had a different schedule. I decided to eliminate several fairs, most of which took place in July. I did this because of the fact that my back and hip, by the end of a regular season, are compromised to the extent that, in October, after the fairs, I walk with a roll somewhat like a drunken sailor (my apologies to the sailing industry). I also added several gallery contracts. Providentially, this was also the year that Bruce retired and began tearing apart all of his work and storage studios for french horn repair. More importantly, our son, Peter, was free only on the weekends, and could help Bruce. The two of them work together very well, and it's always good to pass on information from one generation to the next! Together, they built the twin shedlet on the back of the shed, so that the shed itself would be more efficient for Bruce to work in during warmer weather.
Once I began to do fairs, again, in August, I found it much more difficult, because I had semi-unloaded things (tools, pots, chairs, etc) from the van, and I then had to find them again, and re-organize myself for the weekly run to another fair. Has anyone written about the artist on the fair circuit? It's grueling, with the punctuated reward, on the actual weekend, of getting to talk with your customers, and to talk about the work that you do, and how much you love doing it! As soon as I return home from a fair, however, either Sunday evening or Monday at noon or so, I begin working in the studio, again. There is the kiln to unload, pots to wax and wet and glaze, glaze to fix (prepare by eliminating pin holes and finger marks), a final thinner coat to be layered over the original, after having sponged the first efforts off. All must be timed according to the weather and humidity. Then each pot must be decorated. If the colorants are in need of reworking (sieving, replenishing), that must also be done. The kiln has to be reloaded by Wednesday at 2 pm in order for me to be able to fire it, and have it cool in time for unloading Friday morning as I pack for the next fair. Thursday is the day I do laundry, repack the suitcase, buy food for the next fair, clean the cat litters, do some cleaning, pick flowers for the next fair, and attempt to finish any other jobs before I leave for another fair. There's barely any time to think during this schedule. We're lucky to have had Pete close enough to take care of the cats while we are away. We also now have the Bieber family, who live just west of us, who can help---Sheri has been working with me several hours a week, and her three sons are also very good workers! I try to make enough work for another bisque during the middle of the summer, so I can then continue to do glaze kilns into the fall. This year, for the first time, I am completely out of clay, and have not had time to make more, so will purchase ready-made clay, and will try out several other brands, to see how they might work with my glaze at cone 2.
So---during July, I though I might actually enjoy the summer and get much needed exercise---thus you saw me out at Juliana's, swimming in her pool before she went to Russia. I also rode my bike, and walked more regularly---hard to do with the weekly work schedule I have when I am doing a fair every week. I know that my summers are not very different from all the other artists whom I see at the fairs; it's sort of like the life of a circus roustabout.
Oh, wait!  Did I mention????  I can't REALLY get a large Skutt kiln loaded in 2 and 1/2 days............but I do.  (though, clearly, I can't go filming dancing plush chickens any more, just to amuse my niece, Becca....)(see below, in case you missed it...)
Posted by Ann Tubbs Maiolica Pottery at 9:38 AM